Alright, let’s start this off with some quick points:

Now that we got what is, likely, the most important issues out of the way, let’s dive a bit deeper.

The folks behind itstinks.ca, and I will say I’m quite confident it’s not the Ratepayers Association – who does that leave? 🤔 – is full of baseless accusations that have no legs to stand on.

This “secret deal” is nothing but a proposal put forth by Tridon, forwarded to all parties to this OMB hearing (Middlesex Centre, Komoka-Kilworth Ratepayers Association, and Southwinds Development), back on May 17. So, think for a minute: why did this website domain only get registered yesterday? How long would you sit on information like this if you wanted to drum up a baseless smear campaign?

This proposal is likely being put forth as a contingency plan, on the part of Tridon, in case Southwinds can’t come to an agreement with MXC, and also in case Southwinds can’t complete the draft plan approval conditions. If you were a business owner, and were relying on someone else getting a contract in place before you could start building something, wouldn’t you put together a backup plan?

“But Derek,” you might be thinking, “I was assured at [insert meeting/date] that no more homes would be connected to the existing wastewater treatment facility.” Yes, a fair point. And I would respond by saying that even if Tridon gets this option into their final agreement, they would still need to apply to the municipality to ask to connect those new homes to the existing wastewater treatment facility. And when you consider OPA 28 states no more development is allowed to connect to it, I would state that Tridon would have a heck of a time moving forward with that option, regardless of what the proposal they’re filing on Thursday with the OMB says.

And on that note, I will mention that further proof there is no backroom deal struck is that the hearing is still going forward, as scheduled, on Thursday. No one has been left out of the loop, though the people behind itstinks.ca would like you to think otherwise. Sorry, but it just isn’t true.

Now, think to yourself, out of the parties to this hearing: who would have the most to gain by putting out this almost slanderous text? Who’s threatened Derek that they would go to the press before (not Tridon or KKRPA) just a day before a Council meeting where they had delegation status? Who’s hired a consultant from Toronto to help put together statements like this? 🤔

I have had enough of this sort of mud throwing. When I was appointed to Council in November I thought we could discuss these things as adults. Instead, one party has chosen to resort to schoolyard tactics. 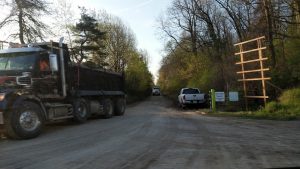 What I can assure you is that all the parties to this OMB hearing, especially Middlesex Centre staff and Council, want to see all these issues addressed and settled so that we can move forward. I’m still very confident that the other parties believe these issues can be addressed and settled in 2017, as well. In fact, the folks at Southwinds were bringing in dump trucks upon dump trucks full of dirt back on April 27, 2017, and bulldozers can be seen filling in the gravel pit with said dirt even today.

I’ll be attending as much of the OMB hearing as I can beginning Thursday. I will provide what updates I can at the time.

I’m going to try and get a recap of the biggest decisions to happen since February up soon, too.